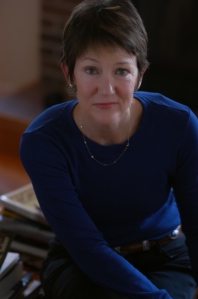 Susan K. Salzer is a graduate of the University of Missouri School of Journalism who toiled happily in the trenches of daily journalism, worked in public relations and as an editor for Mizzou before turning to fiction writing.

Her first novel, UP FROM THUNDER, a true tale of Civil War Missouri featuring the young Jesse James, was published in 2010 by Cave Hollow Press. An audio book also is available from Books in Motion. The novel is based on the short story “Cornflower Blue” for which she won the 2009 Spur Award from Western Writers of America (WWA) for short fiction and the 2010 John Newman Edwards Award from the Friends of the James Farm.

She recently completed the FRONTIER trilogy, published by Kensington. The first two books of the series, FRONTIER and THUNDER AT DAWN were 2016 finalists for Western Writers of America’s Spur Award. The third, POWDER RIVER, was published in June 2016. All three are available in audio book format from recordedbooks.com and graphicaudio.net

“The Saint of Pox Island,” s short story published in the March/April 2012 issue of Ellery Queen Mystery Magazine, was a finalist in WWA’s 2013 short fiction competition. It is the only short story ever published by EQMM to place in the Spur competition.

Sue’s short fiction and nonfiction have appeared in EQMM, Hardboiled, WildWest and various anthologies. She is currently at work on a new novel and a nonfiction project, a biography of the frontier scout William “Medicine Bill” Comstock. The mother of four splendid children—John, Hallie, Max and Lily—Sue lives in Columbia, Missouri, with her husband, Bill, and dog, Josie.