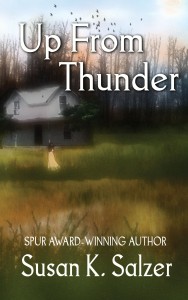 For 16-year-old Hattie Rood, Mr. Lincoln’s War has brought nothing but death and hardship. She has lost one brother to a Yankee sharpshooter, another is away fighting with the Confederate army and her aging father is barely able to keep the family tobacco farm going. One hot August night in 1864, Hattie’s life takes another dramatic turn when rebel bushwhackers bring a wounded Jesse James to the Rood farmhouse, to recover or die. During the next four weeks, as she nurses 17-year-old Jesse back to health, Hattie learns about herself, the lawlessness of war and—most importantly—the character of the wounded boy she comes to love.

Based on actual events, Up from Thunder explores the uniquely savage Civil War in Missouri—a conflict that pitted guerillas led by men like “Bloody Bill” Anderson and William Quantrill against Jayhawkers and often unscrupulous Federal forces. It also examines the ways in which these desperate events and personalities shaped the lives of young Missourians like Hattie Rood, caught in the crossfire.

Buy Up From Thunder from Amazon (print book)

Buy Up From Thunder from Barnes & Noble (nook book)

Buy Up From Thunder audiobook from Books In Motion

FRONTIER (or THUNDER AT DAWN  or POWDER RIVER) is available in audiobook from recordedbooks.com and graphicaudio.net.

Praise for Up From Thunder

“Like Daniel Woodrell’s WOE TO LIVE ON and Michael Zimmer’s DUST AND GLORY, Susan K. Salzer’s UP FROM THUNDER captures the essence, heartbreak and humor of western Missouri during the Civil War.” – Johnny D. Boggs, Spur-Award winning author of NORTHFIELD and CAMP FORD

“In Hattie Rood, Susan K. Salzer has created a vibrant character—a young woman who learns the true meanings of courage, honor and love in the world around her and in herself, all set against the horrific backdrop or Missouri’s guerilla wars. Hattie is a great character and UP FROM THUNDER is a wonderful novel.”—Thomas Cobb, author of CRAZY HEART and SHAVETAIL

“Susan K. Salzer writes with a fresh and authentic voice about the brutal turmoil in Missouri during the Civil War. Amid bushwhackers, freebooters, Jayhawkers, guerillas, ruffians and rascals, young Hattie Rood’s care for the wounded teenager, Jesse James, forms an imperiled eye in the storm of war.”–Lucia St. Clair Robson, author of GHOST WARRIOR and RIDE THE WIND